Following the trail of the IICSAthon

Part One – The Dark Force that Dare not Speak its Name

Yesterday in the Times David Aaronovitch mounted a powerful argument as to why the beleaguered IICSA inquiry should not only be disbanded, but should have never been set up in the first place.

In summary, its scope is too broad, as echoed in the former chair Dame Lowell Goddard's critique, and it was founded on a McCarthyite hysteria about a VIP ring which has since deflated to virtual extinction.

Mr Aaronovitch documents how the crusading zeal of select politicians, journalists and campaigners forced the hand of the then Home Secretary to set up an inquiry. This then became a pawn in the hands of alleged victims and their supporters, leading to the current sorry state of affairs whereby an initial limited inquiry led by a judge became statutory and chaired by an 'independent' overseas judge only for her to jump ship (or be pushed) and leaving a colossal legalistic behemoth now under the chairmanship of a person originally appointed as a social work 'expert' who has no legal qualifications or expertise.

The one interested party in the presumptive IICSA crusade Mr Aaronovitch failed to mention was personal injury lawyers.

But no matter, because even prior to his article, solicitor Peter Garsden tweeted a link to his own article in defence of IICSA accusing 'dark forces' of attempting to bring it down. 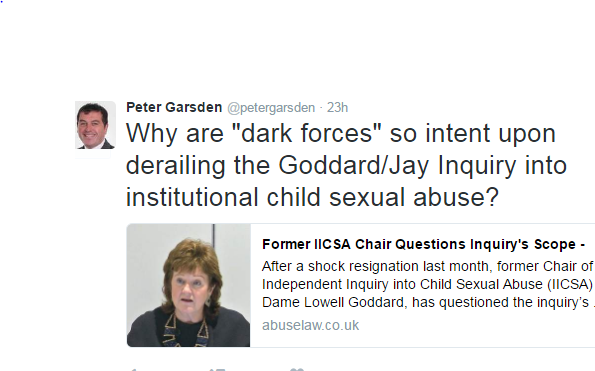 Mr Garsden, a founder of the Association of Child Abuse Lawyers who represents claimants in making compensation claims against institutions, stated that to abandon the inquiry would be a dereliction of duty to the thousands of 'survivors' who have pinned their hopes of justice on a successful outcome.

He includes the proposed hearings concerning the late Lord Greville Janner, adding that he represents some of the accusers and that it is their 'only chance' to receive justice at a public hearing.

There has indeed been a great deal of clamour and controversy about the Janner hearings. For a start they concern alleged abuse by an individual whereas the remit of the inquiry is institutional failings. Secondly, the mode of inquiry precludes the rules of evidence in a civil or criminal court that would ensure fairness. And thirdly, and most importantly, Lord Janner is not able to mount a defence.

But Mr Garsden is wrong when he says this is the accusers' only public recourse to justice. On the contrary, the way has been opened up by the family contesting civil claims against Lord Janner's estate. His son Daniel Janner, a criminal QC himself, has argued persuasively that the matter in the civil court should he heard in advance of any hearings by IICSA, an argument which has been fiercely opposed by another leading ACAL solicitor, Liz Dux of Slater and Gordon.

It was Ms Dux whose voice rang out in the media protesting against the decision not to prosecute the ailing Lord Janner, when he was still alive, and also when he had passed – absurd though that might be in fact and law.

On the face of it, it might seem odd that lawyers demanding justice for their clients supported a criminal prosecution, 'for their voices to be heard', but object to a civil trial, where their voices can be heard and liability decided, in favour of an inquiry which can go no further than a 'finding of fact'. For the inquiry is not empowered to establish liability for alleged offences. It merely provides a staging post on the way.

And here we come to the heart of the matter and the IICSA project. To a man, woman and lawyer, the interested parties will protest 'it's not about money. It's about justice/accountability/closure'. But while that may be true of some victims, the overwhelming majority, signed up to the various survivor groups and ACAL lawyers – which included until recently the now defunct Public Interest Lawyers headed by Phil Shiner, currently under investigation – are looking for monetary compensation.

The Victims and Survivors consultative panel, vocal in its protestations to keep the IICSA ball rolling through NAPAC spokesman Peter Saunders (who Aaronvotich pointed out as being one of the leaders of the original presumptive witchhunt) is in the process of addressing the central aim – the setting up of a reparations scheme.

A reparations scheme need not include cash handouts, but it most probably will. When a similar open-handed scheme was set up in concert with the Irish Industrial Schools Inquiry, it attracted thousands more to make claims. There was no need for proof. Personal injury firms, many based in the UK, promoted the scheme far and wide – and received ample fees for their endeavours.

There is no reason to think that claims would not expand exponentially in the UK were such a scheme to be launched.

Meanwhile in Australia, where a smaller scale Royal Commission has been in progress over a number of years, the setting up of a reparations scheme has triggered yet more controversy and dispute. Claimants,(who do, or did, not want money), say proposed amounts are derisory given their suffering. Questions are also being asked as to whether claimants who have previously received compensation for abuse should be permitted further awards on the basis of extended institutional liability both within and without the scheme. And the institutions who are blamed – not the alleged offenders – are disputing whether they should be held liable to foot the compensation bill or the state.

Because remember, these inquiries do not establish liability, only 'facts' which may provide the basis of an inference for legal liability.

There is little doubt that IICSA – were it ever to get to the point of findings – would come up against similar problems, multiplied.

And the Janner case? The civil case is in respect of Lord Janner's personal estate. Even on the balance of probability, it may be hard for the claimants to establish their case, which would be subject to rigorous cross-examination even in the absence of the testator. It could be a very costly gamble for the legal teams involved on a conditional fee basis, particularly Slater and Gordon the listed Australian law firm reeling from massive losses through its UK acquisitions.

Rather then, the quasi-judicial 'findings' of IICSA, shorn of due process and with legal costs guaranteed.

Any positive 'findings' could then be utilised in an attempt at settlement in the civil dispute or be channelled into the 'reparations' kitty.

This is but the latest episode of the ACAL crusade in making a mockery of justice and patsies of us all.

Part Two will follow shortly as to ACAL and the floodgates of injustice.